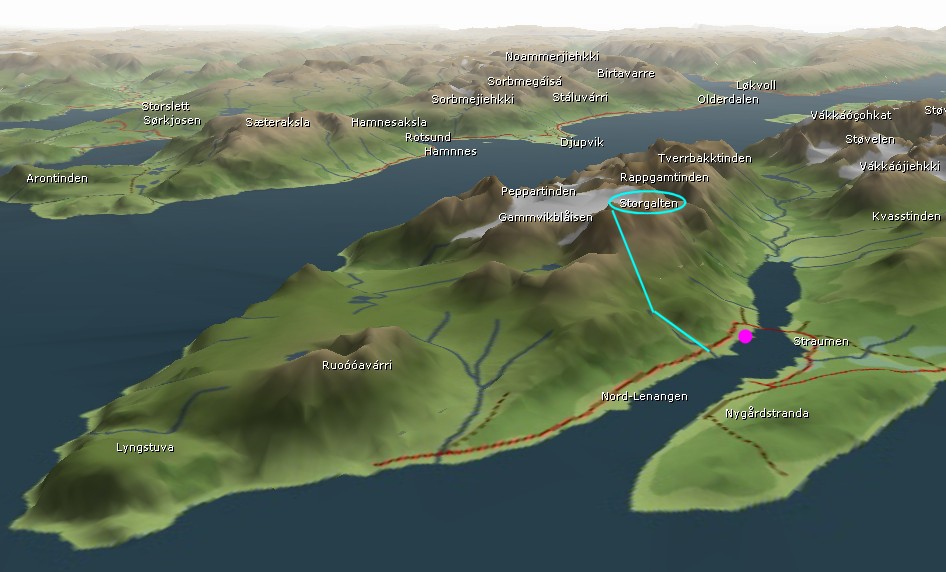 I took a lot of shots and perhaps it was worth it. I took maybe 10 - 12 pans, but, so many are in twilight and a bit gray. This one of the North Lyngen Alps had the right stuff to make into art. See the low-res version

The prominent ridge to the right is Storgalten. See Skiing in Lyngen for source of image to right. - Storgalten Google Maps

The peak at the far right is Vákkáscohkat (1398 meters). That and Stortinden (1240) are mentioned here: Indre Gammvika

I took about 100 photos and used about 40-50 for this panorama. The photos were taken on 2014.02.11 from behind the Nord-Lenangen post i butikk, aka, the Post Office and general store. Very friendly. I'm sure they get their fair share of tourists wandering around. It was only when I tried to figure out which peaks were which that I realized we were in Nord-Lenangen, and not at a similar jetty formation further south in Lenangen.

The tower on top of the mountain to the left is on Trolltinden, Arnøy, Troms near the small town of Akkarvik

Here are the two landmarks that located the panorama within the full set of pixels: the fishermen on the left and Vákkáscohkat on the right.